Alicante is about 400 miles south of Madrid on the Costa Blanca. I had no idea that this area was semi-arid and so mountainous. I caught a 7 a.m. flight so I could maximize my first day at the yoga retreat. The sea and mountains were a dramatic change of scenery from Spain’s big city! 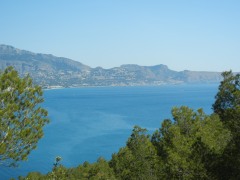 A shuttle van took me to the yoga retreat, La Crisalida, in nearby Albir. When I checked in, the desk manager told me “the hike” would start in 10 minutes, if I was interested. I dropped my bags in the casita I would share with someone; grabbed my camera and water bottle; and was ready to go. The only hikers were John (who owns the yoga retreat with his wife, Lisa) and me.  So, we got to know each other a little bit. 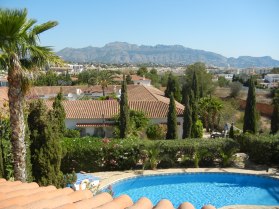 I didn’t know to where, or how far, we would hike.  We walked through the neighborhood and then followed a path up and around a mountain. The sea views were stunning. About halfway up, John pointed to some little speck in the distance and said we were headed there, to the lighthouse, a gradual three miles up the mountain.  Before he’d even told me that, I had silently noted I was sleep-deprived — having gone to bed very late and gotten up very early to catch the airport bus; hadn’t eaten and was hiking on an empty stomach; and…possibly, wearing the wrong shoes. John was moving at a fast clip, and I wasn’t going to be outdone. I just hoped I wouldn’t get dizzy and fall out on my first day there. 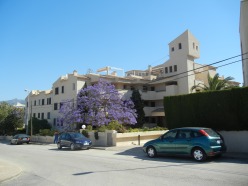 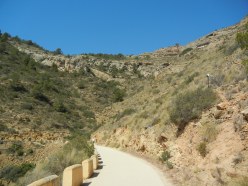 As it happened, I survived. I took photos of the mountain, the sea, and the lighthouse. The blue of the sea was all I had imagined. I was also impressed with my sneakers! 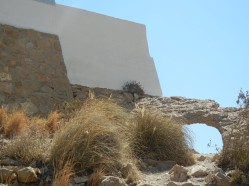 When we returned to La Crisalida, I had to wait for lunch time to eat. (Thank goodness for my emergency stash of dark chocolate!) The retreat’s owners and guests all happened to speak English. (I loved being the only American!) Meals were family-style. We had two delicious fresh juices and three amazing vegan meals each day. (La Crisalida’s chef accommodated my gluten-free request. I had notified the retreat in advance.) In turn, I got with the retreat’s  “de-tox” program during my stay and, after that initial moment of desperation, left my stash of dark chocolate alone. 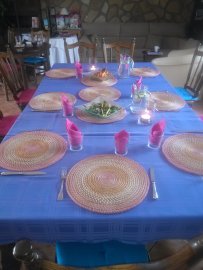 There were scheduled activities: guests could do anything, or nothing at all. I did everything. Every day, I took two yoga classes; a hike; the rebounding class; meditative watercoloring; and participated in the special evening programs. If it hadn’t been a little cool out, I would have been in the pool, too. 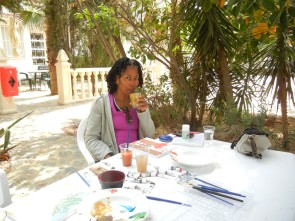 My stay at the yoga retreat was the perfect antidote to Madrid’s pace, jetlag, and solo travel in a country where I didn’t speak the language. I got along well with my roommate, Alexa (from London), who stayed the whole week. The staff was amazing and so helpful, especially when I struggled with my on-line train reservation to Valencia — not easy to do at all!

I’d return to La Crisalida anytime. I was inspired by the stories other guests shared with me. And, after three days there, I felt refreshed when I left for Valencia.