Here’s a tip about a great place to kick off the Christmas holiday revels:  my new favorite city, Detroit. My brother, David, had been telling me about Noel Night for years. I found a cheap flight and spent a long weekend in the city.

But, I’m getting ahead of myself. First, I’m going to share the revelations I had about Detroit before I took part in Noel Night revels.

Almost as soon as I hit town, I walked over to Socratea Teahouse and Gallery in Midtown. It is a lovely, creatively curated space. It’s not only my kind of place, it’s my muse as well. I’ve spent hours writing there, while drinking pot after pot of tea or a smoothie. Socratea does tea up proper, steeping it according to type. I spent so much time there in September, that the owner, Meg Provenzino, recognized me on this visit. That’s actually kind of cool, considering I live in Maryland.

My first revelation:  Socratea is my “happy place” in Detroit.

David’s “happy place” is at the bar of a good restaurant. We checked out two new ones over the weekend. The first was Selden Standard. Not unusual of renovated buildings in Detroit, this restaurant abuts a former vagrant hangout, now a fenced-off vacant lot. At the bar, we talked with a native Detroiter, who had relocated from NYC. Our conversation flowed from Hurricane Sandy to local politics to the food industry and then to our new friend’s take on the Detroit water bill situation.

Speaking of water…did you know that 21% of the world’s fresh water flows through the City of Detroit? The city has been described as the Saudi Arabia of water!

My second revelation: Great food, great atmosphere, and great company – that’s my recipe for a great evening, and it is easy to find that in Detroit. There is a lot of civic pride, and the people are the heart of the city.  Give it up for the Midwest and its accessible and friendly people, even in a hardcore city! 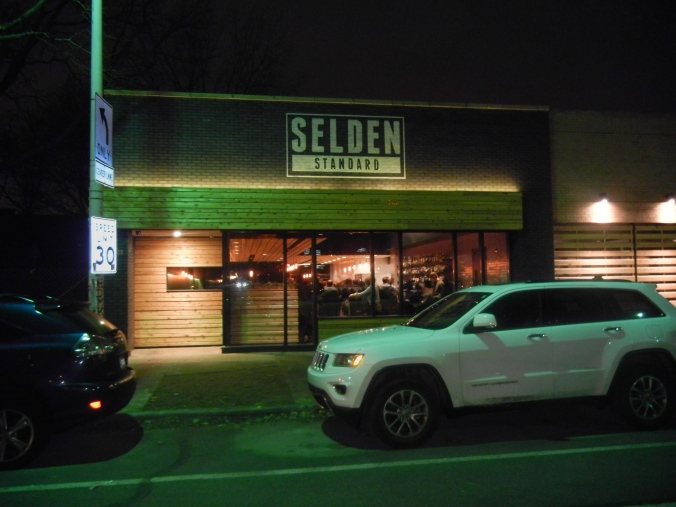 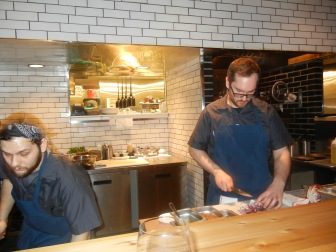 View from the Selden Standard bar 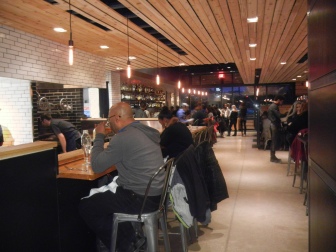 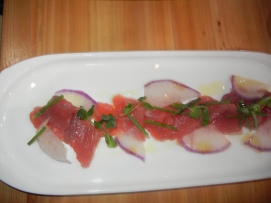 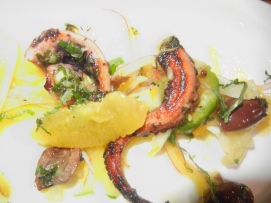 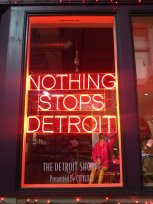 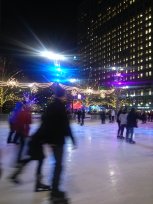 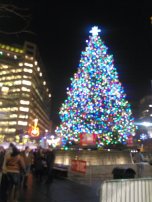 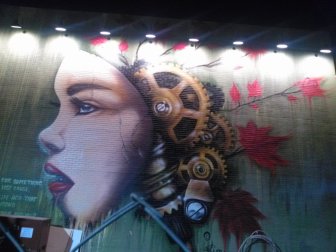 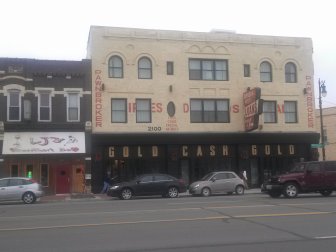 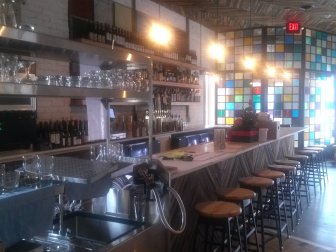 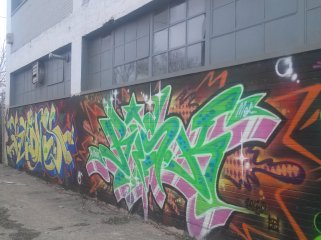 Grafitti on side of Pony Ride 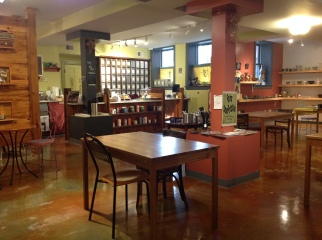 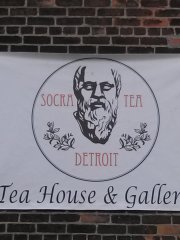 Conversations with random people continued the next day. We started at Astro Coffee on Michigan Avenue in Corktown. It’s in an isolated commercial block in a transitional area. The very successful Slows Bar-B-Q probably started the transition, and is located at one end of the block.

We walked to the other end of the block and saw this signage:  “Pawnshop” and “Gold Cash Gold.” Instead of a pawnshop, though, the interior was fitted out as a restaurant. We were curious; and the door was unlocked, so we went in. The owner, Ronald Cooley, met us inside; gave us a tour; explained all the recycled materials used in the decor; and confirmed that the building was formerly a pawnshop. So, he figured, what the hey – keep the sign and call the restaurant Gold Cash Gold! The grand opening was later that night. It turns out the Cooley family owns both Slows and Gold Cash Gold, and their restaurants anchor the block.

My third revelation:  I saw an area in transition and a single block transformed by small businesses. This block in Corktown is Exhibit A for reclaiming an area for fun and entertainment one building and one block at a time.

Later that day, we went to a wine shop — Fine Wine Source — in Livonia, a Detroit suburb. I asked David why we were driving so far for a wine shop. As it happened, that little wine store run was worth it.

Fine Wine Source is located in a small strip mall not far from the freeway.  It’s an unpretentious family-owned business. The mother, father, and daughter provided personal and superb customer service. They acknowledge and appreciate returning customers, which, of course, keeps them coming back, even if they live miles away. The owner’s knowledge of wine and wine storage goes deep, and he’s happy to make his customers a little smarter about wine.

The bonus was the Saturday wine tasting and meeting Proprietor and Winemaker, Lorenzo Gatteschia. We tasted four wines from his Tuscan estate and winery, Podere Ciona. The wines were very nice and we bought a couple of bottles. Even though we were trying to beat it back to Midtown before the Noel Night crowds descended, it was great spending a little time in this shop to sip and learn.

So, now for the weekend’s signature event:  Noel Night. We had a loose plan for the venues and artists we would see that night. We started at Socratea, which offered free tea samples, cookies, and 10-minute massages to its first 500 customers. We moved on to the Museum of Contemporary Art -Detroit (MOCAD). From there, to Flo Boutique to hear a singer, who was scheduled to perform in the shop window. (We missed his set, but I bought a cute hat.) We stopped through an art gallery on our way to a small pizza shop to hear an up-and-coming vocalist.

The performance by the youth choir, Mosaic Singers, at the Charles H. Wright African-American Museum was one of the highlights of our Noel Night. It was standing room only, but we didn’t stand for long. We slipped into two seats in the middle of the back row as soon as they were vacated, without applying our elbows. (It pays to be quick and civilized!)

We connected with two friends, who were at the Detroit Institute of Art cafe getting some grub. They joined us at the Unitarian Universalist Church for our Noel Night grand finale: Thornetta Davis. She’s a Detroit original, an R&B vocalist, with a huge, gorgeous mid-range voice. Her guitarist and keyboardist are world-class musicians. Thornetta set the tone for the Christmas season with rousing, joyous carols. Her rendition of “Silent Night” — one of the best I’ve ever heard — evoked pure wonder at the long-awaited birth.

If you go to Detroit for Noel Night, anticipate the harshest weather and pack the right layers of clothing so you’re comfortable walking outdoors from venue to venue. Detroiters aren’t weather wimps.  Nothing stops them from reveling on Noel Night to get their Christmas spirit on. 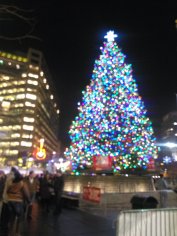