My vacation in Spain last year left me with a long-lasting after-glow. While there, I talked quite a bit with people I met from England, Scotland, New Zealand, and the Netherlands.  They were all in their mid-30s to mid-50s. Their stories inspired me.

This couple exited London’s “rat-race” and their stressful professions to travel the world and figure out where, and how, to live a more fulfilling life. They settled on a resort community on the Costa Blanca. This location is the complete opposite of England’s culture and climate.

John and Lisa found an opportunity to start a business that would give expression to their life philosophy. It started with buying a hotel. To me, this was a bold move and quite a commitment for new owners inexperienced in the hospitality services industry.

In 2013, their hotel became a yoga retreat. From what I saw, John and Lisa have created a flexible lifestyle for themselves. It doesn’t mean they work fewer hours — after all, it’s a business, and a new one at that. But, as part of a day’s work, they lead guests in activities they enjoy themselves, like yoga and hikes. How sweet is that??!  They oversee the menus and have an amazing chef who creates gourmet vegan meals. Healthful, fresh juices are prepared twice-a-day as a between-meals treat. They enjoy it all along with their guests!

John and Lisa went all-in with their life philosophy and they “walk the talk.” This couple’s bold move is a success. They are thriving and growing, right along with their business. 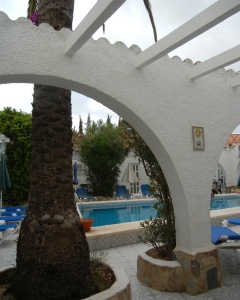 Gail (not her real name)

Gail is a single woman in her late 40s – vibrant, fit, and focused. In fact, she had focused for years on the corporate ladder. She was in a high profile, fast-paced division of a large multi-national corporation in London, earning a lucrative salary. At some point, she began to feel unbalanced and unfulfilled.

When we met at the yoga retreat, she was resisting the demands of her job. Her boss expected her to create a blog in her role as an industry leader, even though maintaining it would encroach on her personal time. She and her colleagues were expected to attend to the incessant beep, buzz, and ring of their corporate-issued devices. The pressure to do so outside of regular work hours was intense.

Gail pondered key life areas, like a romantic relationship and motherhood, and decided they mattered to her after all. She had sacrificed these things in her climb up the ladder. Because of her age, the window of opportunity was closing fast.

When we met, Gail had worked out her exit strategy. I asked her what was next.  She said, matter-of-factly, “I’m going to be a foster mum.” I didn’t expect that answer. Transitioning to a full-time “foster mum” as a career??!  To me, that was extraordinary; in fact, it shocked the hell out of me. I expected to hear about a conventional change in profession, or a move to a smaller organization.

Gail told me about the foster parent application process and the upcoming training. She is unconcerned about diminished income, and is saving enough money to make the transition within a year. Gail has a calling to be a parent, whether she has a partner or not. She has a lot of love to give, and wants to give it to children. Gail’s big transition was to fulfill a key life area that matters most to her – parenting.

I met Jess and her husband at breakfast, where we were all staying at a B&B. It was a brief, but fortuitous meeting – at least for me. First, we were the only native English-speaking guests at the breakfast table. Second, I was interested in starting a blog, and Jess already has one. Our conversation probably lasted all of 15 minutes, but it made a lasting impression on me.

Jess and her family are from London, and moved within the Eurozone to warm and sunny coastal Spain. She and her husband have portable work and can support the family from anywhere. The family later relocated inland, away from resort areas, for full immersion in Spanish culture. This major change was a strategic move.  Jess and her husband want their kids to be bilingual and bicultural. Cost of living was also part of the rationale for change. Almost anywhere in Spain is cheaper to live than London, which means more resources for family travel. The icing on the cake? Jess’s business is a world-wide lodging resource for travelers; and when her family travels, they check out those lodgings featured here.

This is how you create the lifestyle you want! 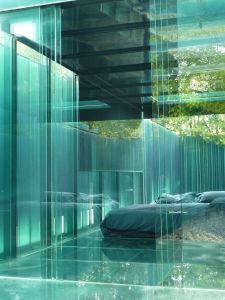 Les Cols Pavellons is close to the Garrotxa Volcanic Nature Reserve. The property offers guests zen décor rooms with glass floors and walls. This beautiful setting brings the outdoors in.

Dany and Thijs quit their jobs and moved to Valencia, Spain from the Netherlands. One of them was a Type A kind of guy, in a high-stress profession, who was on the verge of becoming a nervous wreck. What’s the antidote for a Type A personality? Immersion in yoga and meditation. If geography could also improve his outlook and resources, then cheaper, sunny Valencia was the answer. Dany got on board with the plan and together they moved to a place in the sun.

Dany and Thijs figured out the lifestyle they wanted to have and conceived a business to make it happen. That business became an award-winning B&B.  They leveraged their talents to create a welcoming and artsy environment for their guests. And, every year, they reward themselves with extensive travel in the off-season. As one of them told me, “I don’t worry about the future.”

I admired what he said, and wondered what it would be like to not worry about the future…. 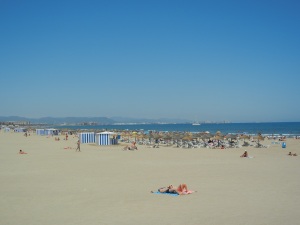 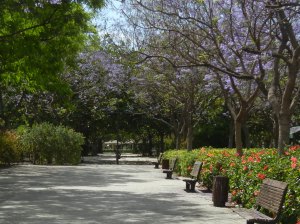 So, how was I inspired?

It takes courage and intention to “get a life.”  It takes a certain amount of introspection and honesty about your priorities to figure out if change is necessary, and what it would mean to you (or your family).

As a practical, somewhat risk-averse, single woman, I am my own safety net. About a year ago, I realized my job had begun to feel like a real grind. I was in an energy-draining loop of home-to-work-to-home (and maybe a tennis match in the evening). And, that was not the healthy life I pictured for myself after battling breast cancer!  Having a balanced life was something I always talked about, and mine was feeling anything but.  I decided I would “get a life.”

Now, I am working out my own “rat-race” exit strategy. I’m putting my energy toward being creative and other things about which I’m passionate. And, my eyes are wide open for opportunities to enjoy life and make a difference.