When I took my eight week hiatus from actively blogging, I had quite a few things to sort out so I could have a more balanced life. I was well on my way to a year that I would sum up as being ho-hum. The first three months were dominated by work, eight tennis leagues, and my blog. I had shirked a few too many personal responsibilities and become a bit disconnected from friends. It was time for a “corrective action plan!”

One of the most inspired things I did — and it fit neatly inside my hiatus — was to register for the six week O-course called Thrive. The course was created by Arianna Huffington and based on her book, Thrive.  Huffington encourages her readers to re-define success as being more than wealth and power. She coined the term “Third Metric,” which is apropos in our increasingly data-driven world.  Who wouldn’t be intrigued by the value Huffington gave to the four pillars of the “Third Metric”:  Well-being, Wisdom, Wonder, and Giving.

Whaaaat?? I signed up! 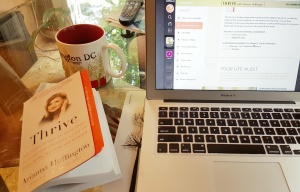 Working on the Thrive course.

When Thrive arrived, I dove into the book with the anticipation of seeing in print the philosophy by which I want to live. I’d only gotten as far as the Introduction when I saw this paragraph on pages 15 and 16:

Eulogies are, in fact, very Third Metric. But while it’s not hard to live a life that includes the Third Metric, it’s very easy not to. It’s easy to let ourselves get consumed by our work. It’s easy to allow professional obligations to overwhelm us, and to forget the things and the people that truly sustain us. It’s easy to let technology wrap us in a perpetually harried, stressed-out existence. It’s easy, in effect, to miss the real point of our lives even as we’re living them. Until we’re no longer alive. A eulogy is often the first formal marking down of what our lives were about — the foundational document of our legacy. It is how people remember us and how we live on in the minds and hearts of others….

This message hit home and reminded me of two foolish decisions I made that allowed my job to trump two medical procedures I needed the year I was treated for breast cancer. One was a second surgery to clear the margins around the lumpectomy — or, what I call the “re-do;” and the other was a liver scan to check for tumors. On each occasion, I was scheduled to give a 30 minute training presentation for my job. I was all about my work ethic and keeping commitments. I asked the organizers if they’d move my presentations to 8 a.m. so I could make it to my medical procedures in the early afternoon. Sure – no problem, they said.

There are a couple of things I’ve never forgotten about playing the martyr. First, I actually expected recognition for it — and never got it — and carried that resentment for years. (With this post, I’m over it.) Second, it was an utterly unnecessary thing to do.  I showed up at the medical procedures unbalanced and exhausted from my job commitments earlier in the day. The real deal is that my reputation for follow-through and strong work ethic would not have suffered one whit for taking care of myself during my health crisis.

Lessons Learned:  1) There is always someone else who can cover the job commitments; and 2) I shouldn’t expect anyone else to care more about my well-being than I do.

The last eight weeks were also an exercise in math:  I added some things in and subtracted others to balance time spent with friends and family, and on activities and community service. I’m glad I pushed that “Refresh” button!

Fog over lake at Kripalu

There is no better place to actually “refresh” than a yoga retreat. Right around the time I decided to take a hiatus from Wobblenot, my friend, Rindi, suggested we meet at Kripalu in the Berkshires of western Massachusetts. It so happened that my Thrive course encouraged meditation, movement, better sleep, and unplugging from technology. The yoga retreat was the perfect place to work on these things and establish new and better habits. I took at least two yoga classes a day, hikes, a nutrition workshop, and meditation sessions.

It is easy to unplug at a yoga retreat.  Kripalu does not have TVs, and wi-fi is only available in specific rooms. You don’t see the mobile zombies  — you know, the people walking around with eyes cast downward and glued on their mobiles. At Kripalu, you can use your mobile phone, but you’d have to either duck into a little booth in the hallway of the main building, or go outdoors to talk – quietly. It’s your choice to be either fully or partially unplugged.

I thought of my job, to which I have been expected to stay connected 24/7, and all the devices I’ve been given to make that possible. For a period of time, I was even required to check work emails first thing in the morning when I woke up and last thing at night before I went to bed. Really???? (That madness has since ended.)

The atmosphere at Kripalu was the antidote for stress. Three days at the retreat did my spirit good. Woo hoooo!!!

So, there you are…those were the main doings during my Hiatus, in addition to re-vamping the blog design. (Hope you like it!) I’ve gotten personal obligations under control. And, best of all…I feel grounded, balanced, and oh, so much better!

5 thoughts on “Taking a Break is a Good Thing (or, How I Spent My Hiatus)”