Outside of Detroit, there seems to be no shortage of bad news about the city. I’m going to give you a balanced point of view.  Detroit is unique, fun, and ripe for opportunity!

These are six things DETROIT has:

BravoBravo!  One of Detroit’s biggest parties of the year is a fundraiser for the Detroit Opera House. The party is well-attended and truly diverse in age, race, ethnicity, and socioeconomic background. I can’t think of another major city where an opera fundraiser would bring together similar demographics. I think BravoBravo! has such broad appeal because the organizers made it a cool event, and they know Detroiters love a good party.

A soprano serenaded the crowd to“Summertime” from Porgy and Bess at the entrance of the Opera House. She set the mood. 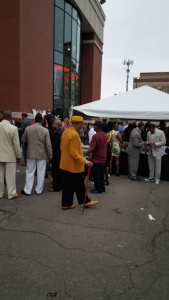 Inside, the Opera House was elegantly decorated, and featured a local band. Food stations featured a variety of hors d’oeuvres from local gourmet chefs. Mixologists and their drinks were in abundance, as was evident by the end of the evening. (Uber, anyone?? )

As usual, my brother, David, packs in a lot when I visit him. BravoBravo! was our first event. (David likes to show off how well his bankrupt city is thriving!)

The next morning, we ate at PJ’s Lager House. It’s on a block with Corktown neighborhood breakfast joints. It was modest…a dive bar…and unexpectedly good for brunch.

After brunch, and a few false starts having to do with whether David really had our tour tickets in hand, we headed to Historic Indian Village. Every year, the neighborhood association hosts a house and garden tour.

At Indian Village’s border was this house — a common sight around the city — and at the edge of the affluent neighborhood.

I’d always been wowed by this neighborhood. Many manors were built for the city’s elite a century ago, on streets lined with old-growth trees. Indian Village is from an era before developers and their four model home designs, cul-de-sacs, and McMansions.  Indian Village lots are substantial enough for expansive gardens and outdoor entertaining. Some homes have carriage houses behind the main house. Carriage houses are yesteryear’s garages and “the help” lived there. Some have been turned into charming residences. 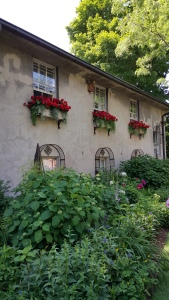 Owning an historic home is a steep responsibility, particularly homes as large as these.  Imagine the cost to heat and cool them.  You can get more house for less money in Detroit, and on a larger plot than you’d expect in a major city.  Conditions of Indian Village homes ranged from restoration underway, or already renovated, to relatively shabby.

Being a fan of HGTV, I was really looking forward to seeing what these homes are like. Tour volunteers let us know if homeowners didn’t allow photos. The volunteers provided interesting historical background, such as one huge manor that was relocated to Indian Village from another part of Detroit, and how its stone facade was reassembled. Some of the stones were jutted out to allow footholds so that the original “lady of the manor” could scale down the side of the house in case of a fire. (She had a fear of being trapped in the house during a fire.)

Most homes were appointed as you might expect. But, two, in particular, were very  unusual.

One home’s interior decorating and landscaping design were quirky, a little creepy, kind of fun, and memorable. This homeowner decorated his home with medical collectibles. The dining room had an operating table with a skeleton on it. (Not shown here.) 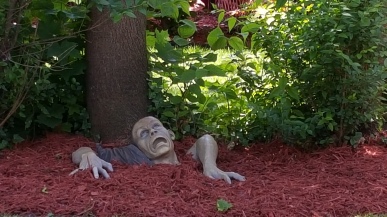 Another homeowner may have missed the memo that the tour should be about the home’s architecture and history. Instead, she showcased her decorating style, which was Godawful — and way, way over the top. The home’s theme was Valentine’s Day — not a winning theme for a tour held in June, mind you. David assumed only his gender would have a visceral reaction to the decor. Wrong! His reaction was the consensus opinion. There were red and white hearts everywhere, bouquets on every surface, plastic bubbles in the bathtubs, red place settings and white doilies at every table. It was  overwhelming!  Plus, where does she store all that stuff ???

Individualism is alive and well in Detroit.

My last tale of the tour is about the fate of some Detroit real estate.  We saw a quaint neighborhood Baptist church in Indian Village. A man out front offered free bottled water from his cooler. David and I went inside and looked around. The man told us he grew up in the church, and his father was the last pastor. His late father had owned the building and preached his last sermon there three years ago.

The son said the building is his birthright, and he’s declined every offer to buy the property. He isn’t sure what to do with it, other than keep it. He fends off family members, who want to sell it; and he suspects they sneak in and pick off items, even pieces of stained glass from the windows. He patches things up here and there, but the building needs a new roof.  The building’s bones are still good, but without a vision and resources, this little gem of a building with its lovely rose window could eventually slide into decay. 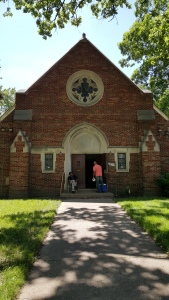 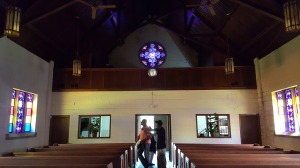 What amazes me about this bankrupt city is that there is a lot of reclamation of buildings because someone had a vision of their potential.  There is great architecture here, so there is less razing of old buildings to make room for something all shiny and new.  Small businesses are taking off here, and big box stores are mostly absent within the city borders.

Our final foodie experience — aside from the wild salmon, vegetables, and garlic potatoes my brother grilled for dinner one night — was Italian cuisine at  La Dolce Vita in the Palmer Park District. To call the exterior modest is an understatement. 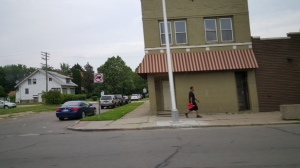 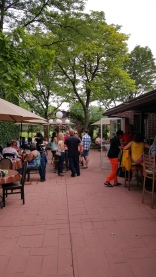 You see, in Detroit, you shouldn’t make assumptions about a place based only on its facade. Or, put another way, “you can’t judge a book by its cover.” Our meals were delicious and reasonably priced. This restaurant calls itself “Detroit’s Best Kept Secret.”

Here’s what I think:  Detroit itself is a Best Kept Secret. Don’t tell anyone else it’s worth a visit. Shhhh….

2 thoughts on “48 HOURS IN BANKRUPT DETROIT”