Attending a blogger conference in 2015 was on my to-do list. I did some research and found BlogHer15 — a conference that supports women bloggers. It would be in July at the New York Hilton. My sister, Cheryl, and I go to New York every summer, so this was perfect for the geography and my hotel points. As always, we balanced our activities. We bookended the conference with hang-out time in the City and with family. 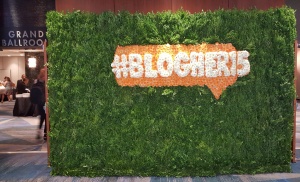 First things first:  BlogHer15’s theme was “Experts Among Us.” I had no idea what to expect. Blogging has become quite an industry. I was excited to dive deeper into our blogging venture and share the experience with Cheryl.

SheKnowsMedia masterfully rolled out the BlogHer keynote speakers and workshops in the months leading up to the conference. I was uncertain how I would fit in with established bloggers because this blog is young, and yet-to-be-monetized. Cheryl was apprehensive about the social and networking aspects of the conference. I  hoped the conference would kickstart relationships with other bloggers.

I don’t know how many bloggers attended BlogHer15, but it seemed like easily a thousand. BlogHer15 was a professional, unexpectedly balanced production. It doesn’t mean the conference was perfect because I saw some missed opportunities to help bloggers connect with others in their blogging genre. Nevertheless, there was plenty of substance there for everyone.

Why BlogHer15 impressed and inspired me:

We were in great company with many accomplished women. 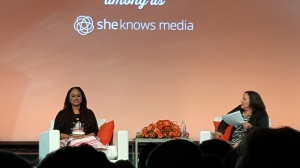 Last, but not least, a few words about The Big Apple and how Cheryl and I enjoyed the City.

Before we checked into the conference, we had a mission on the Upper East Side. That mission was to hit the two Roundabout designer consignment stores.  After we scored some very cool items at the semi-annual sale, we enjoyed a long walk back to the hotel.

We dined in Harlem at Barawine (Lenox & 120th) — delicious! We walked a few blocks from there to the Richard Rodgers Amphitheater in Marcus Garvey Park where we saw a jazz singer and her trio, followed by Classical Theatre of Harlem‘s production of  Shakespeare’s, “The Tempest.” I hadn’t seen the play before and agreed with reviews that the acting was superb. Classical Theatre of Harlem produces a play each summer at Marcus Garvey Park that attendees can see for free!

Our final highlight in NY was brunch at Cocotte in SoHo with my nephew / Cheryl’s son, David. I had the fluffiest, most divine (and expensive) scrambled eggs, potatoes, and peach bellinis ever! True French cuisine is worth it (as an occasional treat).

And, I’ll close with a final image from New York….