I had already written a three-part series on “Getting Around Europe” based on my recent travels to Paris, Brussels, and Amsterdam, when Paris was attacked by terrorists. I decided the timing was wrong for publishing these posts. They might seem frivolous in the face of world-wide shock, and the suffering of those living through this ordeal and those who lost loved ones.

Then, I thought of what I’m trying to share in my posts — that travel is a good thing, and there are many marvelous places in the world. Paris happens to be one of them. No acts of terrorism can change that.

Inevitably, some people will think the world is too unsafe and unpredictable for them to leave home. Or, they might think Paris is particularly unsafe because 2015 opened with the Charlie Hebdo terrorist attack and closed with more of the same. Some of my sister’s friends know she is going to Paris in the spring and asked her to reconsider. She won’t, and I don’t blame her.  Unless there is a State Department warning or alert, we would not hesitate to return to Paris. These terrorist attacks could happen anywhere.

Cheryl and I talked about the relative danger here in the U.S.  Do we tell kids and teachers not to go to school because there might be a mass shooting? Do we decide to work from home because our office building might get bombed? Do we forego Bible study at our church in case someone in our group will open fire on the rest of us?  Do we stop training for, and running, marathons because they might end in bedlam and carnage? Terrorism and hate crimes have happened here, too.

You can’t stop moving, living, or experiencing regions and cultures because of these frightening events. There’s a reason why they are called acts of terrorism. When dealing with adversity, resilience trumps all.

Resilience is already evident in Paris. The people there are determined to press forward in the act of living, even though they’ve been asked to remain indoors. They mourn and stand vigil in various places around the city. And, eventually, Parisiens will regain their trademark joie de vivre. They know that if they give in and give up, then terrorists win after all. 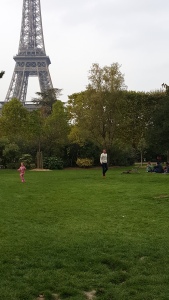 4 thoughts on “On the Paris Attacks”