If you live near Pennsylvania Amish country as I do, the National Christmas Center Family Attraction and Museum in Paradise, PA, is a perfect way to kick off the Christmas season.  A self-guided tour through this museum delivers history, culture, tradition, fantasy and faith to showcase Christmas throughout the world.

When you enter the museum, you see life-sized vignettes of American family celebrations of the holiday.  The cultural reference points include jolly Santa, children trying to sneak a peek at Santa, children tearing open presents with delight, and the traditional Christmas tree topped with a star.  These images — part of our national consciousness — actually date from mid-20th century American Christmas celebrations.  You (or your parents) might be catapulted back to these very familiar moments.

In the corridor leading to the museum proper, you are treated to an exhibit of the history of Santa Claus.  Santa is derived from St. Nicholas, a Turkish bishop known for giving gifts to the poor.  St. Nicholas was depicted wearing his bishop’s miter, a tall conical hat.

As the legend of St Nicholas evolved to Santa Claus, the clothing and depiction changed, too.  Some images are of an ugly, gnome-like creature, while others are both ugly and disturbing on many levels. Dare we say the forebears of Santa — the beloved icon — looked creepy?  The Dutch, the Belgians, and the English all added or subtracted elements over the course of Santa’s evolution. You will be fascinated with both the images and the history. 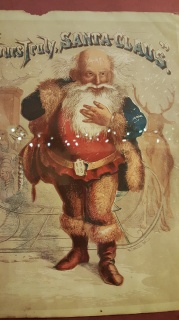 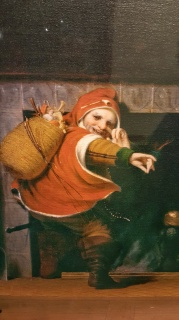 One of my favorite exhibits was the crêches (nativity scenes).  I love these because they demonstrate that Christianity is celebrated all over the world with each culture injecting their own race, nationality, and heritage into their understanding and depiction of the story.  Indeed, it is easy to see the manifestation of God’s gift to the whole world through these crêches. 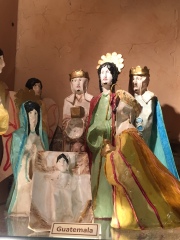 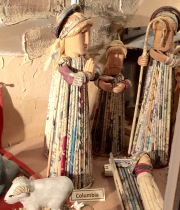 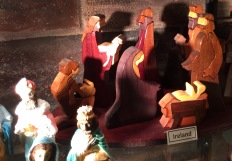 I was taken back to an era when a Woolworths 5&10 store was the nerve center of a community. Lancaster, Pennsylvania was the home of the original Woolworth’s.  The museum has a replica of the store’s Christmas section.  You can walk around the space like a shopper and marvel at the cost of trinkets, decorations and gifts from back in the day.

In the museum proper, we find Bob Cratchet and Tiny Tim from Charles Dickens’s, A Christmas Carol. 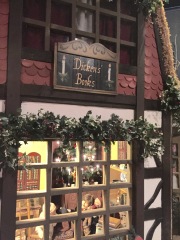 From there, you can wander through one “country” after another, approaching a front door, looking in a window, and being transported to Christmas celebrations in other times and places.  There are a variety of Christmas trees, decorations and depictions of Santa and other figures important to the season.  Vignettes are captivating, inviting you to return for another look to see what you may have missed.  Be warned, this could take you into serious visual overload!  The wonderfully curated vignettes match sounds — music, animals, Christmas carols, or spoken word — with the scene. 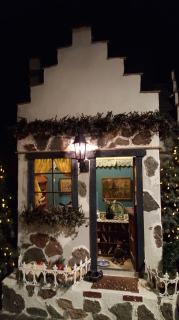 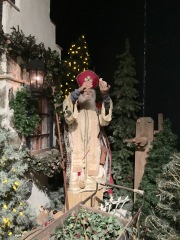 Moving on, you find Tudor Town and delight in the animals’ storybook Christmas.  As you move through this exhibit, you can read the story and see the characters in charming vignettes—pure fantasy.  Your inner child will approve.

While all the fun and delight of Christmas is great, it’s easy to forget the point of the celebration. The next several rooms set the stage for Christ’s birth, beginning with “O Holy Night,” a life-size panorama of the desert and the travelers at night.  You begin to quiet inside, letting the images seep into you. 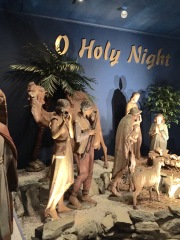 After “O Holy Night,” you are back in daylight experiencing a walk through Bethlehem and the market place.

You look inside the type of dwelling Mary and Joseph would have called home; and realize they were in the Middle East.  Think about it in light of current events.  I did.  The curator did a fantastic job of making this transition and leading us into “the Holy Land.”  The mystery and wonder begin to envelope you.  You remember the Christmas story as it unfolds in front of you: the angel appearing to a shepherd; the good news heralded by horn; and Mary, Joseph, and Jesus in the manger.  The tour doesn’t end here, but the Christmas story does.  You have reached the apex.

Winding down, you are shown gifts and ornaments from different cultures arranged as if in a small boutique.  There were lovely things, odd things, some you would expect, and some you wouldn’t.  Two displays, in particular, struck me as almost heretical for today’s consumer.

Did you know that cartons of cigarettes were popular gifts in the ’50s?  And, did you ever see an advertisement for the gift of a gun?

“To give or receive a Winchester Rifle or Shotgun affords pleasure and satisfaction.  At Christmas time or at any season, a man, a woman, or a boy who enjoys life will appreciate a Winchester as a gift.”

The National Christmas Center Family Attraction & Museum has something for everyone and is worthy of an annual pilgrimage, if you can make it.  It is open most months of the year, and now…well, ’tis the season! You can enjoy the museum with or without kids—though the teachable moments with kids are numerous.  You will experience nostalgia, hope, and the realization that there are common bonds among all peoples.