When we think of Parisians, we think of artists, fashion designers, style trendsetters, and people who express the joy of living. On that last note, I’ve always heard the French embrace the “work to live” ethic. It’s so much more in line with having a balanced life.  (Sigh.)

These are my additional thoughts about Parisians.

1. PARISIAN DOGS HAVE A SPECIAL PLACE IN SOCIETY.

Parisians have little dogs. Parisian dogs can go almost everywhere their owners go —  unless they’re expressly not allowed (like cemeteries). I think French bull terriers are a favorite breed.  No surprise there! 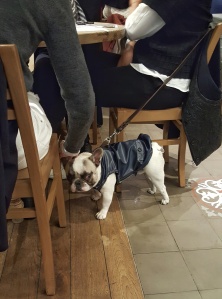 Usually, Parisian dogs are on a leash; but sometimes they’re not. This particular dog looked like he belonged right in that spot. People had to walk around him because he wasn’t budging. 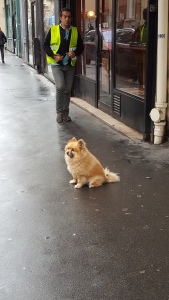 I came across this dog — ancient, toothless, and dearly loved by her owner. She accompanies her owner to antique shows and flea markets in this antique baby carriage. 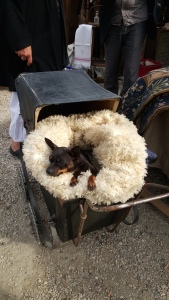 Parisian dogs have attitude — a certain je ne sais quoi. This one had a stylish strut, like his owner. The Parisian dogs I saw didn’t consort with strangers and were downright aloof. I couldn’t get their attention at all. 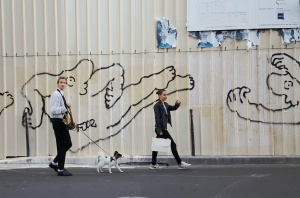 (My sister’s dog, Lulu, would never be mistaken for a Parisian dog. She’s the right size, but, bless her little heart, way too friendly and undisciplined.) 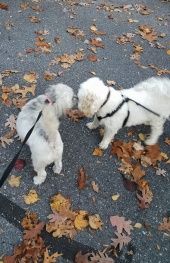 2. PARISIANS ARE NOT RUDE SNOBS.

I don’t understand the reputation the French have in the U.S. for being snobs and rude. I’ve never had that experience, especially in Paris. Parisians interact with “politesse.”  The word originates from the Latin word polire — meaning, to polish. Politesse means formal politeness. Courtesy. Basic civil interaction. Good manners. Geez…what a concept.

These four little French words can earn you some engagement with Parisians:  “Bonjour” (hello), “Merci” (thank you), and “Au revoir” (goodbye), and “Pardon” (Excuse me).

I stopped people on the street regularly to ask for directions. I would get someone’s attention with “Pardon, (Madame / Monsieur). Bonjour.” To which they would respond, “Bonjour.” I would ask for directions in a way that was not brusque or entitled. I’d start my  question in French with “Je cherche….” (I am looking for….) and pull out my map. I’d always be respectful, because … guess which one of us needs help. After awhile, I understood directions en français:  “tout drois” (straight ahead); à droite (to the right); and à gauche (to the left).  Even the most rushed person would stop, listen intently, and pull out their smartphone for Google Maps to show me where to go.

Parisians — they had me at “Bonjour.”

3. PARISIAN KIDS PLAY AND ARE TRAINED TO BE INDEPENDENT.

I was struck by the number of kids I saw un-tethered to adults. We call them “free-range” children in the U.S. I saw these kids independently making their way to school, none of them with eyes glued to a device. Some kids looked as young as eight. They were usually in pairs or small groups, talking and laughing with each other.  Some kids rode through Paris streets on their scooters. I also saw plenty of Parisian parents with their kids, especially in parks. 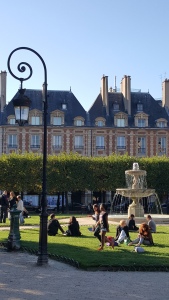 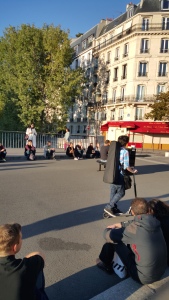 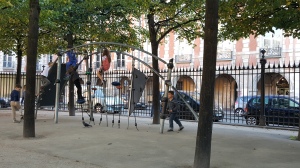 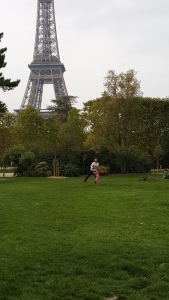 On a side note: I saw a Parisian dad publicly discipline his son. The child was a hellion, willfully disobeying his dad and charging across the street on his scooter with dad in hot pursuit. I stopped to watch the spectacle. (I had a flashback of the uninhibited discipline U.S. parents gave their kids before “helicoptering” took over.) This dad snatched that boy off his scooter, and spanked him down to the ground. The boy got up, and reached for his scooter. The dad didn’t give it back.  Maybe he was training the boy for the day when he could safely and independently ride his scooter on Parisian streets. Good for that Parisian dad!

4. CAFÉ DINING IS A PARISIAN WAY OF LIFE.

Parisian cafes are equipped with awnings and heat lamps. Bad weather won’t stop the unabashed people-watching. If  you notice, everyone sits facing the sidewalk and the chairs on the other side of the table are empty. The outdoor café diners are the audience; and you…passersby…are the show. 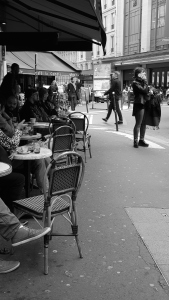 5. PARISIANS DO TINY SPACES WITH STYLE.

I gave myself a splurge at the end of my trip and decided to spend my last night in Europe in a traditional hotel. But, I didn’t really want an ordinary hotel. I checked out quirkyaccom.com to find something different that I could afford. The price, about €135,00, was right for a splurge in the 15th arrondissement. 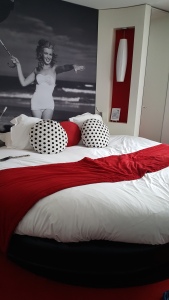 Hôtel Platine is a cinema-themed boutique hotel. Hence, the blonde babe as the focal point over the bed. That bed was a huge playground! Alas, I was solo. Just so you know, the blonde bombshell over my bed gave me neither nightmares nor a complex. I slept very well, and was happy to wake up still me with black hair and smart.

The bathroom was the most efficient use of space. Lighting options were a Hollywood production.  For instance, this shower could be lit with regular lights or amped up with red lights, as shown here. 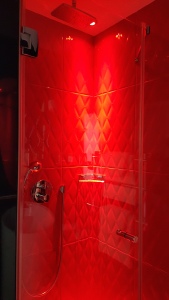 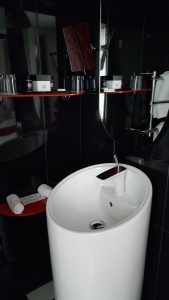 I was dazzled by the glass-walled bathroom, and it took more than a minute to realize this was a two-piece bathroom.  As the French would say, “Oú est le toilet?” 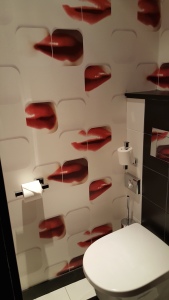 In a room that was only yea big, I opened doors until I…found it! Behind a door that I thought was another closet, there was the toilet and this lip-smacking wallpaper.

Other unique hotel features were the movie screen in the elevator, the Turkish bath available to hotel guests, and spa services for additional cost. The hospitality was top-notch here, too. I’d come back for another splurge.

I look forward to traveling to Paris again, and discovering more of the city and its residents. About those Parisians: I’m a fan.

9 thoughts on “What I Think of Parisians”