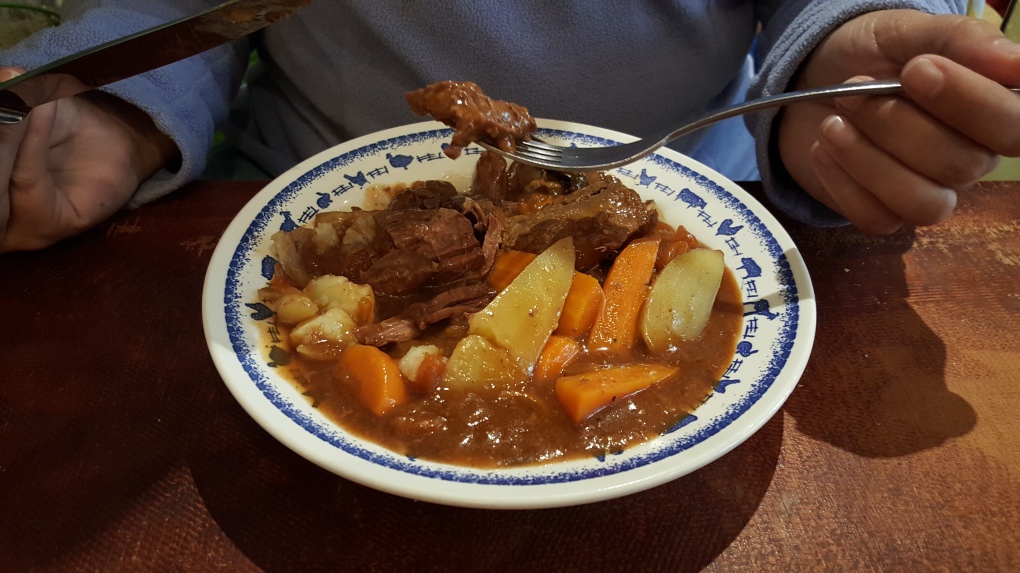 I’ve been thinking about my trip to Europe last October because my sister, Cheryl, will be traveling there soon. We’ve talked about how food is a major part of the travel experience. And we definitely love food.  What does it mean to “eat like a local”? It can mean eating where locals eat; eating the way locals eat (with locally-used utensils or hands) and even eating at the time of day locals eat.

Of the three European cities I traveled to, I spent the most time in Paris. I love French food, but my diet has changed over the past eight years. No béchamel sauce, crêpes, croissants, pastries, and baguettes for me. So I thought. But, I also figured I could navigate my little food quirks, even in Paris.

The French take their entire culture — language, art, music, wine, and food, very seriously. They are clear about what it means to be French. France has a Minister of Culture presiding over touchstones of French identity and French contributions to the arts. French words pertaining to food, like restaurant, gourmet, café, connoisseur, and cuisine are commonly used in English language.

French cuisine has always been a gold standard for trained chefs; and I have read that the cuisine is in crisis.  So what does that mean? Food at an authentic-looking bistro may have been previously frozen, perhaps pre-assembled, and not totally prepared in-house with raw ingredients. Read about it here.

(Good lord…that sounds like American restaurant chains! I didn’t have to leave home for that!)

So, with that awareness, I decided to be discriminating about where I would eat in Paris, same as I am here. I would not eat at bistros with burgers and pizza on the menu. I can get that food here (if I were so inclined — which I am not). But, then again, when you’re fresh off the plane and it’s lunch time, you might just bust those standards and eat anywhere. People who know me know that I go from very hungry to “hangry” fast.

I found Bistrot La Bonne Cécile a mere two blocks from my Airbnb and ate lunch there. The menu is rotated seasonally. The restaurant served fresh food made in-house. I could not have been more delighted with my first meal on the Continent, and glass of Sancerre. The restaurant was charming and the service was exceptional. (Tip: you do not tip in France.) 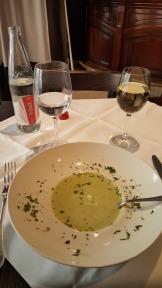 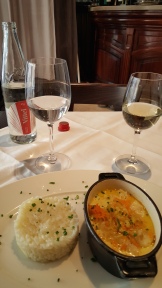 Coffee is big in Paris, but I don’t drink it. I indulged, instead, in chocolat chaud (hot chocolate) made with milk and cream. Made right, it’s oh-so-rich. I’m lactose intolerant and didn’t get a stomach ache from drinking it!  Best cups are made with chocolate, not cocoa powder. As noted in this blog, using a powder instead of a high-quality chocolate bar with its rich cocoa butter, is really hot cocoa and not hot chocolate. 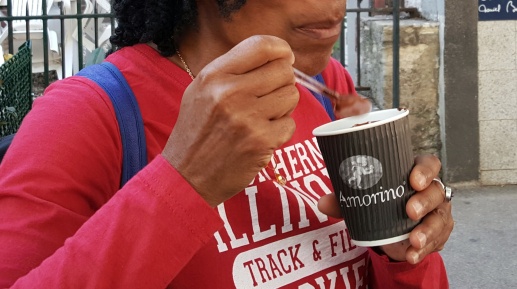 Paris has an abundance of ethnic restaurants. I enjoyed them, too. I also had great meals at very casual restaurants. One of them was Le Pain Quotidien. My friend, Charlotte, asked me to meet her there. We have one in D.C. — that I’d never been to — and I didn’t expect to go to that chain in Paris. Well, it was a cut above and delicious! I had a great salad, gluten-free bread, and a bowl of soup. I’ve since been to Le Pain Quotidien in D.C.

Some other casual restaurants in Paris:

Divin’ Art, near Arts et Metiers Metro, is a gluten-free crêperie in walking distance of my Airbnb. I ate a savory crêpe (smoked salmon, soft-boiled egg, and peppers), carrot soup, green salad, and a chocolate crêpe.

While walking in search of Paris’ street art in the Oberkampf neighborhood, I found this vegetarian and gluten-free restaurant. I had a fresh juice, carrot soup, and a vegetable rice and almond dish. Simple, healthy, and delicious. And the meal was cheap! 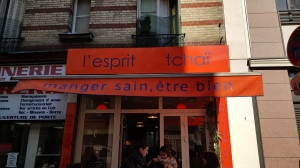 I also ate food that was a little out of my comfort zone. The complete meal here was the salade niςoise and escargot, with a glass of white wine. 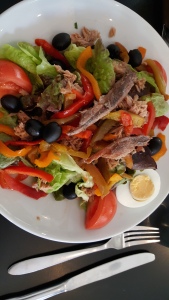 Eating escargot was a challenge. I eat escargot because they are a super-beneficial food for my blood type. I take an almost medicinal view toward it.  I don’t go into a swoon over the taste, but escargot is more than just palatable. The challenge was dealing with the little animal in its shell, which was a first for me. The escargot I’ve eaten has always been hidden — thankfully, because they are rather ugly — under a garlic, parsley and butter sauce in a snail plate. No shells included.  But, I had on my big girl panties and would eat escargot like the French.

I asked the server to show me how to use the snail tongs. First, you grip the shell, which is when I had the Pretty Woman moment. The shells are indeed “slippery little suckers,” but at least they didn’t go flying across the room. Next, you use the little fork to pull the critter out. After an embarrassing struggle, I managed to grip three shells and pull out three escargot. I couldn’t get the last two out of their shells.  As far as I was concerned, no one was home. The server was watching me, so I asked him to try. I wish I’d taken a video of him trying to find the snails. He probably thought it was just me. He gave up, too, and put in an order to replace the two snails that had gone missing. 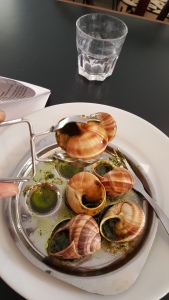 See this video for how to eat escargot.

Another outside-the-comfort-zone food was this dish of wild mushrooms (chanterelles, porcini, and parasol) and poached egg.  I don’t like poached eggs, but I gave this dish a go.  It was a work of art, interesting and tasty. The restaurant, La Mazenay, was lovely; and the service was meh.

A highlight was lunch with Charlotte at elegant Bofinger’s near Place de la Bastille.  I had this delicious fish and vegetable dish.

I also ate this dish of sauerkraut, or choucroute. It was not part of my order. It came from the table of diners next to ours. I was eye-ballin’ their sauerkraut because they weren’t eating it, and it looked good. They were eating the pork all around it instead. Charlotte asked the diners if I could have a taste. That was a little tacky, I know, but I guess they decided to help the American out. 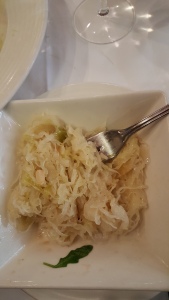 Another food that is not everyday fare in the U.S. is  rabbit, or lapin. I had this very tasty rabbit and prune stew at Le Pichin 3 — a family-owned restaurant in the City of Chartres near the Cathedral. Damn, it was good!

Lapin at the market before one was turned into stew

In addition to chocolat chaud, I enjoyed two other kinds of sweets:

Macarons — looking like colorful little hamburgers, these gluten-free cookies made of almond flour have a flavored cream filling. They are everywhere in Paris. Quality matters. Eat enough of them and you can distinguish the mediocre from the sublime.

Panna Cotta — the best I’ve ever had in my life came from a tiny Italian restaurant Charlotte and I ducked into to escape the rain. This was Charlotte’s dessert. After a taste, I had to order my own. The texture was perfectly smooth, and the sweetness came from the berries and sauce.

My main dining event was a six-course dinner at Pierre Sang in Oberkampf. The hostess took everyone’s food restrictions and preferences. You don’t order from a menu. The six courses are the chef’s choice and everyone gets the same dish, customized as requested.  The hostess answered our questions about what we had eaten afterwards. I was fine with that. It was part of the experience. Reserve a seat at the bar so you can watch the chefs and talk with other diners, especially if you’re solo. 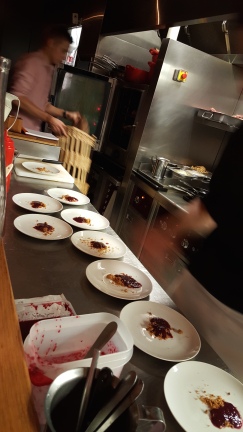 I was thrilled that the Pierre Sang experience was only €45. For the same price here in D.C., a diner could pay that or more for uninspired fare.

There are so many options for dining in Paris. You can dine satisfactorily or fabulously for good value in this city.  Challenge your food comfort zone when you travel, and eat like the locals!