My well-planned and balanced trip to Spain exceeded expectations! Transfers between cities and modes of transportation were seamless. All was perfect…until it was time to come home.

Maybe it was that last rainy, windy, dismal day and night in Madrid…it was about 40 degrees outside and I was under-dressed. It was late May, after all, and I had packed for heat in Spain; not chilly rain. Add to that my cheap attack that led me to stay in a lousy hotel. The morning of my flight, I was finally ready to go. 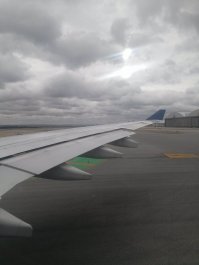 But first, some good stuff.  The first leg of my flight from Madrid to Philadelphia was uneventful, which is always a good thing. I made a friend from Brussels while waiting for my next flight. You’d think Mollie and I had known each other for more than a minute. We exchanged numbers and email, and said we’d meet again. I also had a delicious, though premium-priced, meal at the airport and was able to charge my devices at the bar.

Now, for the hot mess.

The airline cancelled my flight from Philadelphia to Baltimore-Washington International Airport because of the weather. I managed to book another flight that would leave about three hours later than the original. Mind you, home was tantalizingly close — less than three hours’ drive away — making the delay all the more brutal. I considered taking the train, and then realized my checked bag would arrive at BWI without me. I let that idea go. I ate another meal and found ways to kill time, including losing my cell phone, retracing my steps all over the terminal, and finally retrieving the phone from the person who found it right as my flight was boarding.

I arrived in Baltimore around 9:50 p.m; my bag did not. I realized I’d left my house key and driver’s license in it. So, I called my sister, Cheryl, who had a copy of my house key. Luckily, she was still up and said she’d bring it and meet me curbside outside the baggage claim area.

Meanwhile, a Bulgarian guy was also at the lost baggage counter looking lost himself. (I knew his nationality because I had glanced at his passport when we were in Philly.) The lost baggage lady couldn’t communicate with him to find out where to deliver his bags; I couldn’t either. Then, it dawned on me that I could call my Bulgarian friend, Krisi. By then, it was around 10:45 p.m. I hesitated to call her at that hour, but the lost guy looked pitiful. I called her, anyway.

Krisi became the interpreter between the lost baggage lady and the lost Bulgarian. I was happy to help, and happy my friend could help. Hopefully, things got sorted out because my sister arrived curbside and I needed my phone back. Cheryl gave me the key.

I had to wait almost two hours for my prepaid shuttle van because the service was also affected by flight delays. The van dropped me off at home – finally – around 1:30 a.m. As the shuttle van pulled away, I realized I had a problem. I put the key in my door lock:  it didn’t turn. The key looked like my house key, but it wasn’t. Crap. My sister was no longer answering her phone. (Thanks a lot, Cheryl.)

Lesson learned:  Don’t pack your house key and driver’s license in the bag you check at the airport.

I put my vacation after-glow on pause….

I didn’t want to wake the neighbors at that hour with my sad, embarrassing tale. I was exhausted and only had a little bit of charge left on my cell phone. I called a cab and waited for it while curled up on top of my car trunk, using my backpack as a pillow. It was actually a warm night in Maryland, unlike my last night in Madrid. For all my efforts to economize my travel, I ended up paying for another night in a hotel and the cab fare to get there. Home:  tantalizingly close, for real, and I couldn’t even get in the door.

Cheryl wasn’t able to bring me the right key until around 2 p.m. the next day; and the airline delivered my luggage about 12 hours later in the middle of the night.

The tail end of my travel was messy, but it didn’t detract from my great experience in Spain. Once I was back in my house and my luggage delivered, my equilibrium and vacation after-glow were restored! 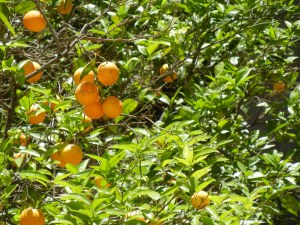